Jump to 'Cancer (r)evolution - Your turn to play'

Studying cancer by adopting an evolutionary vision, using notions of the evolution of species, ecology and population genetics, sheds new light on the complexity of the different processes occurring within a malignant tumour.

Let’s travel back in time ….

Unicellular organisms are made up of a single cell and are the first living organisms to have populated our planet 3,500  to 4,000 million years ago. They are able to adapt quickly to often changing and unfavourable environments, due to their ability to divide quickly and the genetic diversity of the populations which result from this.

The emergence of multicellular organisms, more than 2,500 million years ago, required the establishment of a certain number of rules for living in a community. A clever balance between competition and collaboration!

In animals which appeared some 500 million years ago, cell divisions are strictly regulated and limited. Cells are capable of committing suicide (apoptosis) benefiting of the cells around them. And cells respect geographical (anatomical) barriers: a liver cell will not invade the brain!

Cancer cells evolved along with animals, some 500 million years ago. These cells no longer respect the rules of community life and no longer cooperate with other cells.

…the oldest malignant tumour (an osteosarcoma) has been found in the bone of Centrosaurus apertus, a dinosaur that lived around 76 million years ago.

Cancer cells use old reflexes inherited from our unicellular ancestors: they are able to divide and evolve rapidly to escape the constraints of their environment. They thus escape surveillance by the immune system, become resistant to treatment or can invade other more favourable regions of the body. And, above all, they are genetically very diverse!

+ more information: What is cancer?

Cancer: a story of mutations

Cancer most often begins following the accumulation of random mutations in the DNA of a cell in the body.

+ more information: What is a mutation?

Most of these mutations are inconsequential. But some can ‘affect’ genes and modify the biological functions of the corresponding proteins. They can thus impact, for example, the control of cell proliferation and/or the DNA repair system.

The affected cell then begins to divide more rapidly. New mutations can arise during cell divisions at the time of DNA replication.

Some cells with certain mutations do not survive, others proliferate, change behavior and eventually form a malignant tumour.

Examples of genes that are involved in cancer when mutated

Random mutations can ‘affect’ genes and thus modify the biological functions of the corresponding proteins.

Certain genes (called anti-oncogenes or tumour suppressor genes), when mutated, no longer produce functional proteins. The absence of the corresponding proteins can induce the development of a cancerous cell.

It is estimated that several hundred genes are responsible for the behavioural changes typical of cancer cells when mutated. The biological processes affected are mainly the control of cell division, the ability to repair DNA, the ability to commit suicide (apoptosis), the ability to evade the immune system or the ability to invade other tissues.

A malignant tumour is very diverse from a genetic point of view: different combinations of mutations located in different genes are present in the different cell lines that make up the tumor.

+ more information: What is DNA profiling?

+ for the experts: the network of genes which when mutated are involved in cancer (in red)

TP53, a gene implicated in cancer, elephants, and us

When the DNA of a cell is damaged, a protein called TP53 is activated and prevents the cell in question from reproducing: it thus gives it a chance to repair its DNA so as not to transmit genetic errors to subsequent generations.

If repair is not possible, TP53 will induce cell suicide, a process called apoptosis. Depending on the mutations present in the TP53 gene, the corresponding TP53 protein is no longer functional: this is the certain start of cancer.

Even though elephants have many more cells than us and even though they especially live much longer than us, they almost never have cancer! Why?

A possible explanation is as follows: elephants have twenty copies of the TP53 gene, while humans only have one, located on chromosome 17. The probability that all 20 copies are mutated at the same time is exceedingly small: there will therefore always be functional TP53 proteins in the cells of the elephants!

Knowing the mutations present in the DNA of cancer cells makes it possible to identify the altered proteins and therefore the biological processes that are impacted.

But is it enough?

Cancer: a story of mutations AND evolution

A malignant tumour can contain more than a billion cancer cells.

Tumour cells, even though they are all derived from a common ancestor cell, are genetically very diverse. Each cell can give rise to distinct subpopulations (subclones) with different combinations of mutations.

Subpopulations compete with each other, for example for access to nutrients and oxygen.

Many dominant cell populations at a given time may fall into evolutionary dead ends and die out, while a minority cell population may be able to persist and become dominant.

Darwin or not Darwin ?

Peter Nowell, in 1976, was the first to put forward the hypothesis that the evolution of cancer cells could be of the Darwinian type.

“It is proposed that most neoplasms arise from a single cell of origin, and tumor progression results from acquired genetic variability within the original clone allowing sequential selection of more aggressive sublines. ” 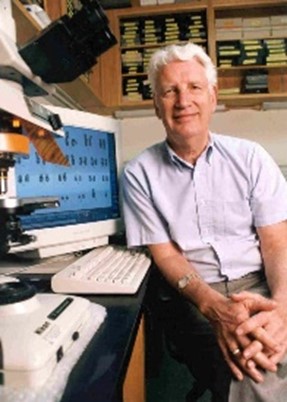 However, the evolution of cancer cells is more complex: it is not always gradual and sometimes defies Darwin’s laws.

Models to represent the evolution of cancer cells

A better understanding of cancer therefore requires being able to understand how the different populations of cells present within a tumour evolve over time.

However, the evolution of tumour cells is difficult to study in patients. It is not possible to take regular samples throughout the course of the disease. Most studies predict the evolution of tumours from a few samples taken at irregular time points and use mathematical models that use notions of species evolution, ecology, and population genetics.

The model below makes it possible to represent these populations of cells which have diverged from the red ‘common ancestor’ cell, and which evolve in parallel in the tumour mass to give rise to multiple cell lines (this model is called ‘branched evolution’).

In this model of branched evolution, the evolution of subpopulations is shaped primarily by the competition of different cell populations for the limited resources of the microenvironment. Some subpopulations are subject to positive selection and further expansion, giving rise to new populations of offspring, while others, poorly adapted, do not survive.

These different events can also be represented in the form of a tree. The black cell is the common ancestor of all tumour cells.

Each node corresponds to a common ancestor cell of the following generations. With each division, the cells acquire new mutations: the corresponding cells can continue to divide or not…

In the end, over time, only cells with certain combinations of mutations, red cells, then blue, green, and yellow cells, “succeed” in forming subpopulations of cells that continue to divide and evolve.

This type of tree makes it possible to reconstruct the combinations of mutations present in the ‘common ancestor’ cells over time.

Knowing the mutations present since the beginning of the tumour history could, for example, make it possible to choose a treatment that specifically targets the mutated protein and the corresponding altered biological processes.

Some examples of models

Branching Evolution: several sub-populations (or sub-clones) of cells evolve in parallel in the tumour mass.

Neutral Evolution: no subpopulation of cells takes over. Each subpopulation exhibits a similar ability to survive in the tumour environment. This type of evolution occurs when selection pressure does not play an important role: the evolution of different subpopulations is shaped by genetic drift – random elimination of existing subpopulations and random formation of new subpopulations. The tumour mass is genetically very diverse.

Punctuated Evolution: also called macroevolution or big bang. A major genetic abnormality occurs which leads to the appearance of a subpopulation of dominant cells.

CANCER (R)EVOLUTION - YOUR TURN TO PLAY

Each cancer is unique. Knowing the evolution of a tumour can help make a diagnosis and choose the best possible treatment.

Surgery removes either the whole tumour or part of it. Radiotherapy uses radiation to destroy cancer cells. The goal of immunotherapy is to help our immune system eliminate cancer cells,  while chemotherapy uses drugs to kill them.

Chemotherapy leaves the field open to populations of cancer cells which, by chance, had characteristics allowing them to resist treatment. Resistant cells can then proliferate in a favorable context, with easier access to nutrients and oxygen since there is no competition from other cell populations.

Therapies inspired by the principles of evolution

Several therapeutic approaches try to take advantage of a better knowledge of the evolutionary processes of cancer cells. Some examples:

Studying cancer by adopting an evolutionary vision therefore sheds new light on the complexity of the different processes involved and other therapeutic approaches.

Cancer evolution: Darwin and beyond (2021)

The evolution of evolutionary processes in organismal and cancer evolution (2021)