What does their DNA tell us?

Jump to 'Ancient Greek mysteries - Your turn to play'

Greece has made its mark on Western history, philosophy, art and architecture, … and so much more.

But what happened in Greece over 3000 years ago?

Who were the people who lived in Greece during the Bronze Age, who were their ancestors and how does this affect the Greek population today?

Let’s take a journey back in time to try to unravel some of the mysteries of the ancient Greeks!

This story is focused around the Aegean Sea, an offshoot of the Mediterranean. The Aegean Sea is surrounded by mainland Greece, Turkey, and the island of Crete.

Use this interactive map and click on ‘Modern Day’ to see the current cities and countries around the Aegean Sea.

A bit of history

During this period (which is part of the Stone Age), people in Greece went from living in hunter-gatherer societies to a more sedentary society, due to the domestication of plants and animals.

In Greece, the Bronze Age started just after the Neolithic period. It is divided into 3 main time periods: the Early, Middle, and Late Bronze Age.

This period is notable for the development of urbanization. It is also the beginning of an increasing agricultural production, trade and population growth.

It is the beginning of agricultural specialties such as wine and oil. Even the first written languages in Europe appeared in the Middle Bronze Age! 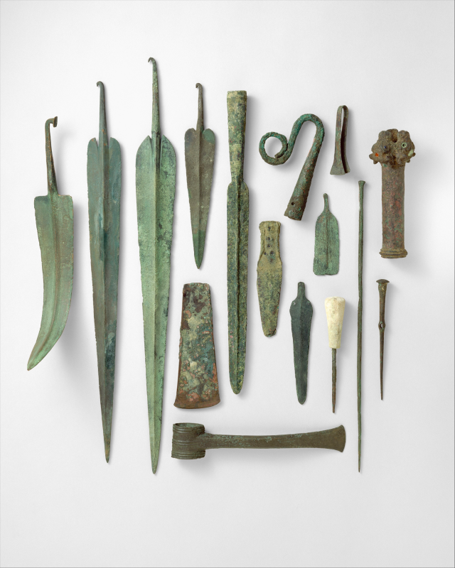 Examples of Bronze Age spears and other weapons dated 2000–1900 BCE, found in Cyprus. Currently located at the Met museum in NYC. Source

Aegean Civilization during the Bronze Age

These civilizations clearly interacted with each other.

Use the interactive map and click on “'Ancient Civilizations” to see the locations of the different Aegean civilizations.

The localization of these civilizations around the Aegean Sea favored commercial and cultural exchanges due to their close proximity.

Many different cultural artifacts have been found around the Aegean which point to this mixing of cultures. This includes artwork, pottery style, burial customs, and architecture.

But did the people also exchange chromosomes ?

Who were the ancestors of these different civilizations ?

Based on archaelogical data, several hypotheses have been proposed:

Investigating the genetic relatedness between populations from different civilizations, locations, and time periods can help us to solve some mysteries!

Mystery no. 1: What is the genetic relatedness among Aegean Bronze Age civilizations? In other words, did individuals also exchange their chromosomes?

Mystery no. 2: What is the genetic relatedness between Aegean Bronze Age civilizations and other ancient and modern Eurasian populations?

Mystery no. 3: How are Aegean Bronze Age individuals related to modern-day Greeks?

Mystery no. 4: What did the ancient Greek individuals living in the Bronze Age look like?

In a research study published in 2021, scientists used DNA to answer these questions!

Bones are a window into the past

With the help of archaeologists, scientists extracted DNA from the bones of six individuals who lived during the Bronze Age. These six individuals were found at different archeological sites and belong to different Aegean civilizations. 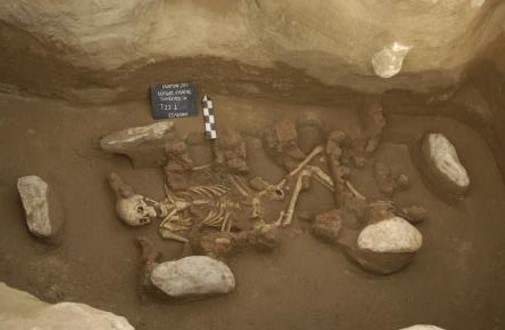 The burial site Logkas, where two of the six ancient individuals sequenced in this study were found. The skeleton shown here was named Log02.

Information about these ancient individuals is shown in the table below. Scientists used radiocarbon dating to determine the age of the bones – 4 were from the Early Bronze Age and 2 were from the Middle Bronze Age.

Use the interactive map and click on 'Ancient Individuals' to see the archaeological sites where the bones of six Bronze Age individuals were excavated.
Determine from which Aegean civilization each individual belongs to.

Using ancient DNA to track the origin of human populations

Ancient DNA (aDNA) can be extracted from ancient organic materials such as teeth, bones, or sediments. Samples can come from either museum artifacts or archeological sites.

Extracting and sequencing aDNA is challenging because the DNA is often present in small amounts, quite short, and damaged due to its fragility and exposure to the environment.

More information: Can we really extract ancient DNA from dinosaurs?

The Nobel Prize for Medicine 2022 goes to the Swedish Svante Pääbo, founder of paleogenomics. S. Pääbo had to develop ways of analysing DNA that had been damaged by thousands of years of exposure to the elements, and contaminated with sequences from microorganisms and modern humans. He sequenced the oldest ancient human DNA: 430,000-year-old.

S. Pääbo also sequenced the genome of Neanderthal in 2010. These Neanderthals lived around 120,000 years ago. Here is the link to the mitochondrial DNA sequence in a public database: GenBank.

The DNA holds the clues: single nucleotide differences in the DNA sequence (called SNPs) allow us to figure out from which population the six individuals came from.

Note: For simplification, we do not take into account the fact that individuals are diploid.

A bit of math and statistics

But how do we go from detecting SNPs in ancient individuals to knowing how closely related they are?

Bioinformaticians use several statistical methods to visually represent the similarity between individuals. One such method is called Multidimensional Scaling (MDS).

Here is a simplified representation of an MDS analysis for the above example.

The MDS plot (right) is based on the data in the table. It is called multidimensional scaling because we can reduce the amount of information (dimensions) used to characterize the data into its two main components. These two components are then used as axes to plot the individuals in 2D space. The more similar the genetic sequence, the closer the points appear on the plot.

Our MDS analysis allows us to see that there are 2 different groups of individuals:

What is the genetic relatedness among Aegean Bronze Age civilizations?

In this MDS plot (which is not interactive), each point represents an individual. Remember, the more similar the genetic sequences, the closer the points are on the plot. 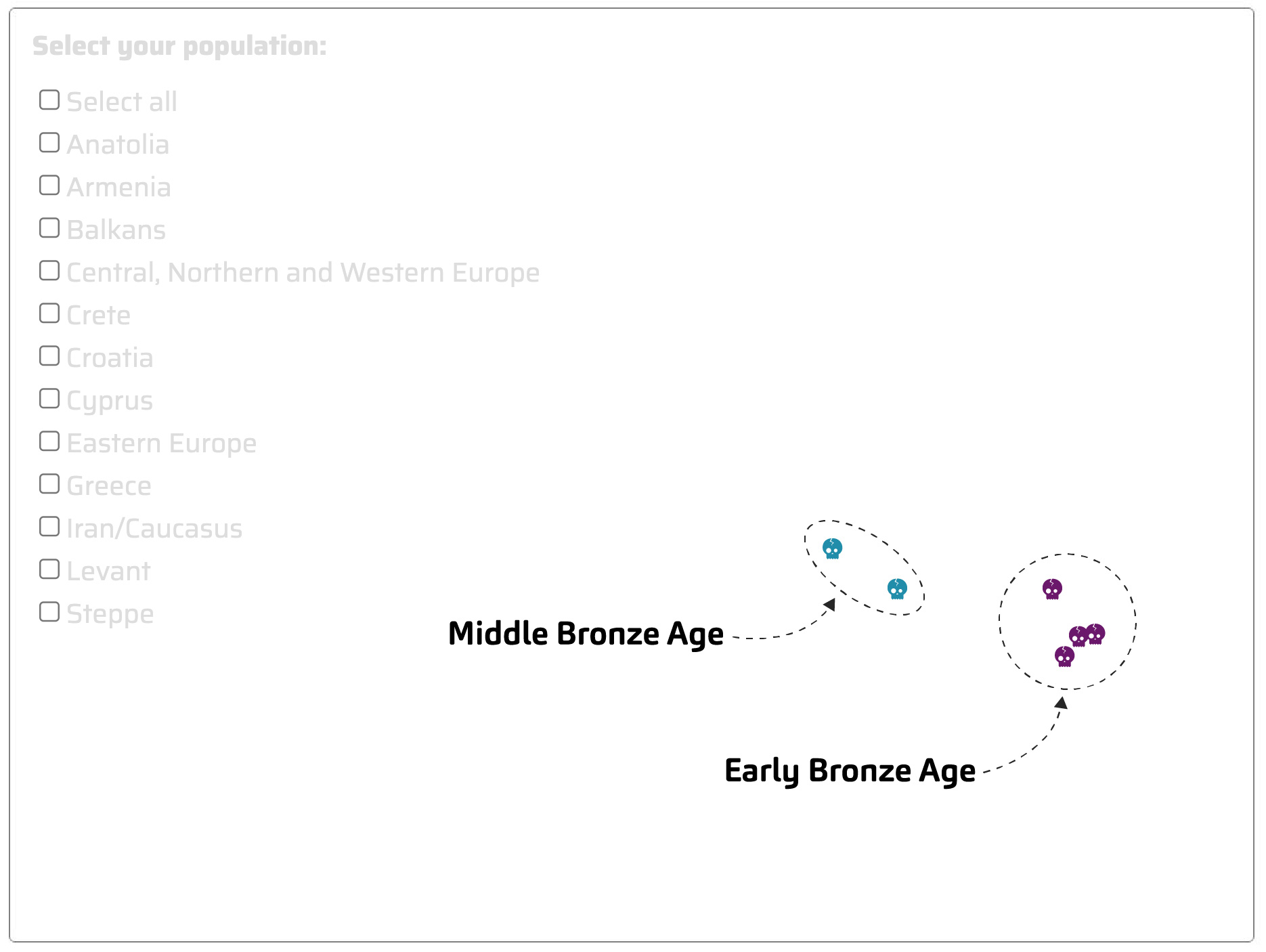 This supports the idea that Early Bronze Age people from the Aegean region mixed, not only culturally, but also genetically!

What is the genetic relatedness between Aegean Bronze Age civilizations and other ancient and modern Eurasian populations?

Several million SNPs of the six Bronze Age individuals, of the other ancient DNA (n=259) and modern-day DNA (n=638) samples from different geographical locations and periods were analyzed.

The results of the MDS analysis are presented in the plot below, which is interactive:

Use this MDS plot to try to figure out which ancient population – from which period –  is the most similar to the four Early Bronze Age individuals.

The genetic similarity across Early Bronze Age cultures in the Aegean and parts of Anatolia suggests that these populations used the sea as a route to interact, not only culturally, but also genetically.

Bioinformaticians use this information to trace ancestry with a software called ADMIXTURE. It uses characteristic sets of SNPs present in the different DNA sequences to determine which populations the samples come from. In this study, the software was used as a complementary analysis to the MDS plots.

Below is an extract from the ADMIXTURE results of the ancient and modern Greek SNPs analysis. Each column in the plot represents an individual, and each color represents a different genetic background (different ancestry).

The data showed that the transition from Neolithic to Early Bronze Age (our four individuals) is characterized by gene flow between local farmers and immigrants from Iran/Caucasus (more of the blue component over time in the ADMIXTURE plot).

However, there was a major contribution of the local Neolithic populations as well (red component in the plot).

These genetic results support the long-standing archaeological theories about the transition from the Neolithic Age to the Bronze Age – local and new populations immigrated to ancient Greece from Anatolia and Iran/Caucasus.

Present-day Greeks are genetically similar to the two individuals from the Middle Bronze Age.

What have we learned so far?

The Neolithic Age and the Bronze Age were important epochs for Greek history.  Historians and archaeologists have known that there were different civilizations around the Aegean sea;  these different civilizations had a great influence on each other, for instance, they share common innovations such as the construction of sophisticated palaces, the development of urban centers, intensive trade or the intensive use of metal. But now, using ancient DNA, we know they exchanged DNA too!

Both local and newcomers from Iran/Caucasus and Steppe contributed to this period of innovation. And modern-day Greeks still carry the traces of this ancestry!

What did the ancient Greek individuals living in the Bronze Age look like?

It’s your turn to play! Use SNPs to find out what ancient Greeks looked like. Were they ‘lactose tolerant’ in adulthood?

Ancient Greek mysteries – YOUR TURN TO PLAY - What did the ancient Greek individuals look like?

The genomic history of the Aegean palatial civilizations (2021)