Cancer (r)evolution
- Your turn to play

Discover different representations of the evolution of cell populations!

Back to 'Cancer (r)evolution - Story'

Cancer: a story of evolution

Cancer is the result of an abnormal proliferation of cells. This accumulation of cells leads to the formation of a tumour.

Tumour cells, even though they are all derived from a common ancestor cell, are genetically very heterogeneous. Division after division, each cell can give rise to distinct cell populations.

These different populations evolve according to the environment. Selective pressures vary over time under the effect of endogenous (tumour environment, geographical barrier, patient’s immune system) and exogenous (drug treatments) factors.

Dominant cell populations at a given time may find themselves in evolutionary dead ends and disappear, while a minority cell population may be able to persist and become dominant. In some cases, several populations may coexist.

Studying cancer by adopting an evolutionary vision therefore sheds new light on the complexity of the different processes at play within a tumour.

However, the evolution of tumour cells over time is difficult to study in patients. It is not possible to take regular samples throughout the disease.

Most studies predict the evolution of cell populations from a few samples taken from time to time and use mathematical models that use notions of species evolution, ecology, and population genetics!

Your turn to play

Here are representations of diverse types of evolution of cell populations within a tumour.

Try to match the types of evolution with the different representations (graphical and tree) and with the explanations that go with them by moving the boxes vertically.

Check
I give up

The rapid evolution of cancer cell populations can be achieved through the appearance of new mutations in each generation and the genetic heterogeneity of the resulting cell populations.

The evolution of bacterial populations live

The video on the right shows the growth of a population of intestinal bacteria, called Escherichia coli (in white), cultured on a large plate covered with an agar containing nutrients (in black).

This plate is composed of several bands, each band contains increasing concentrations of an antibiotic, with the highest concentration (1000x) in the centre.

With each change in antibiotic concentration, the growth of bacteria slows down. New populations of mutant bacteria, resistant to a higher concentration of the antibiotic, appear and continue to divide.

The populations of bacteria that grew in the center of the plaque became resistant to a 1000 times higher concentration of antibiotic, and this in the space of 11 days!

Hence the importance of following the dosage of the antibiotic treatments prescribed to us to the letter! 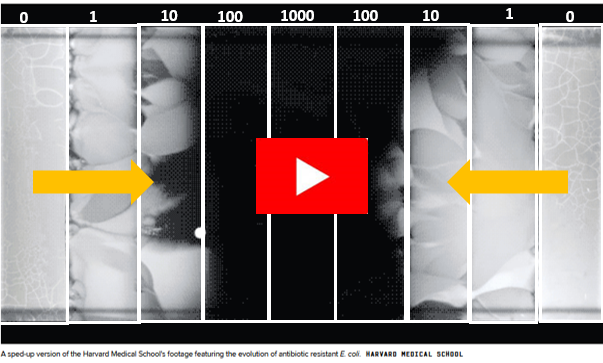