Did you know we share about 98% of our genes with chimpanzees? But how many with the banana?

Jump to 'Banana Split - Your turn to play'

We share about 98% of our genes with chimpanzees. Chimpanzees are often considered as our closest ‘cousins’. That seems evident to anyone who has seen the movie Planet of the Apes: chimpanzees and humans have many characteristics in common!

But did you know that we also share some of our genes with the banana? The existence of these genes in common is proof of the relationship that exists between all living organisms. 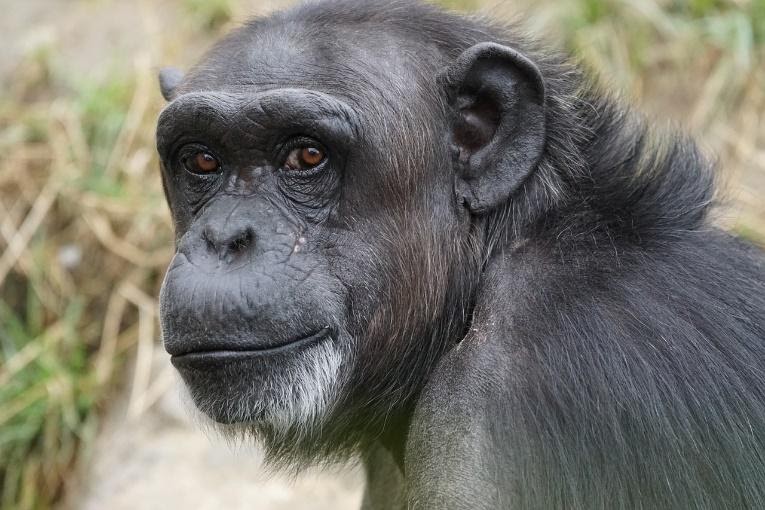 Humans and chimpanzees have a large proportion of genes in common, as their common ancestor lived some 6 million years ago.

The ancestors common to humans and the banana lived some 1.5 billion years ago – just before the ‘banana split’.

One can thus expect that there will be considerably fewer genes in common between humans and the banana! 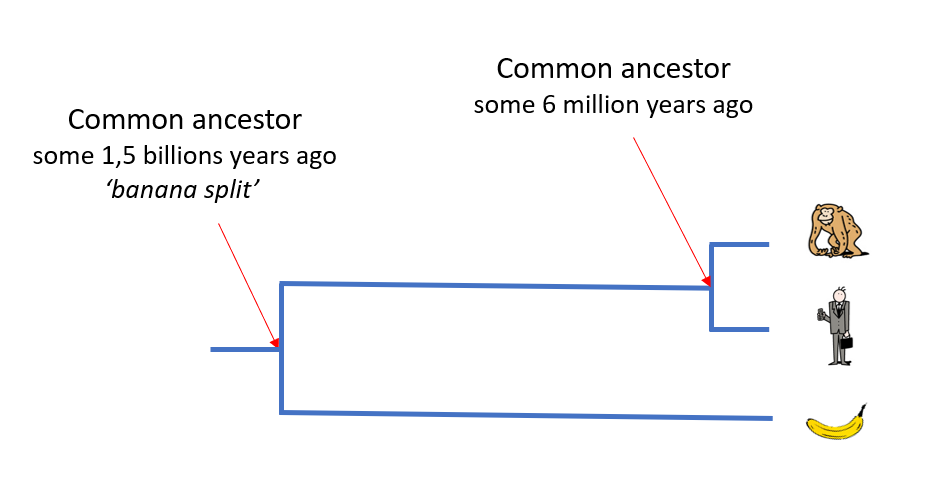 Sources: Genetic evidence for complex speciation of humans and chimpanzees (2006) - Divergence time estimates for the early history of animal phyla and the origin of plants, animals and fungi (1999).

What percent banana are you?

A simple search on the Internet will lead you to numerous web sites that mention that humans and the banana have between 17% and 50% of DNA in common.

Is that right? Why are the values so different? What does it mean when we refer to “percentage of DNA in common”? How can this percentage be calculated? 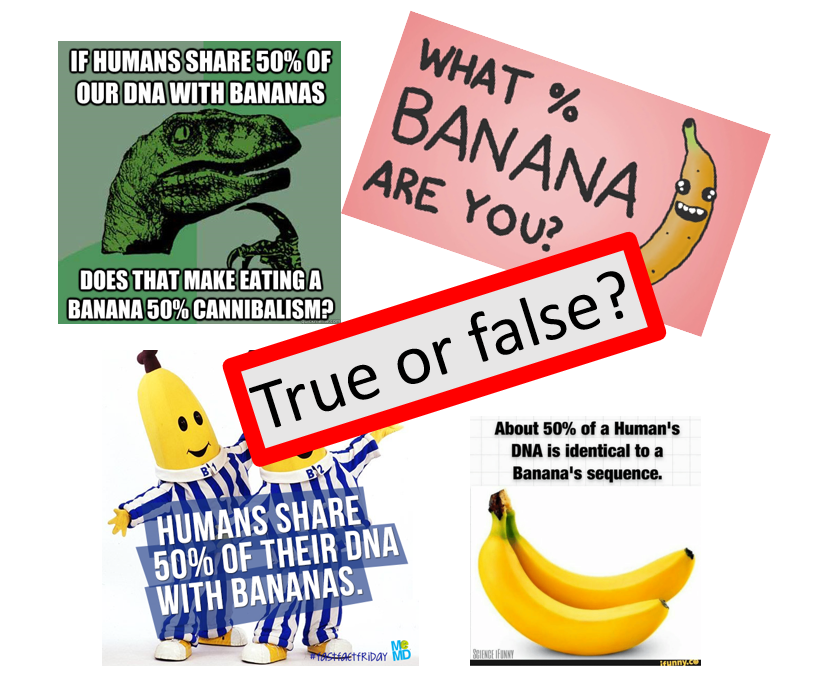 DNA in common…or genes in common?

A BIT OF BIOLOGY > Cell, chromosome, DNA and genome

The more distant two species are in evolution, the smaller the percentage of their genomes can be aligned. For plants, this percentage will thus be less than 1%!

Aligning the entire human genome with that of the banana (which is 6 times smaller) is thus a daunting task…and does not necessarily make sense in our case!

A bit like the different chapters of a recipe book, genomes are composed of different regions, which each have a specific biological function. These regions are not necessarily distributed in the same order in the genomes of different species. Some have been duplicated and some have disappeared over the course of time. And it is essential to compare what is comparable!

To come back to the recipe book, it would be useless to compare the recipe of a chocolate cake proposed by Auguste Escoffier to the recipe for mayonnaise or the Banana split of Paul Bocuse, even if they were on the same page! 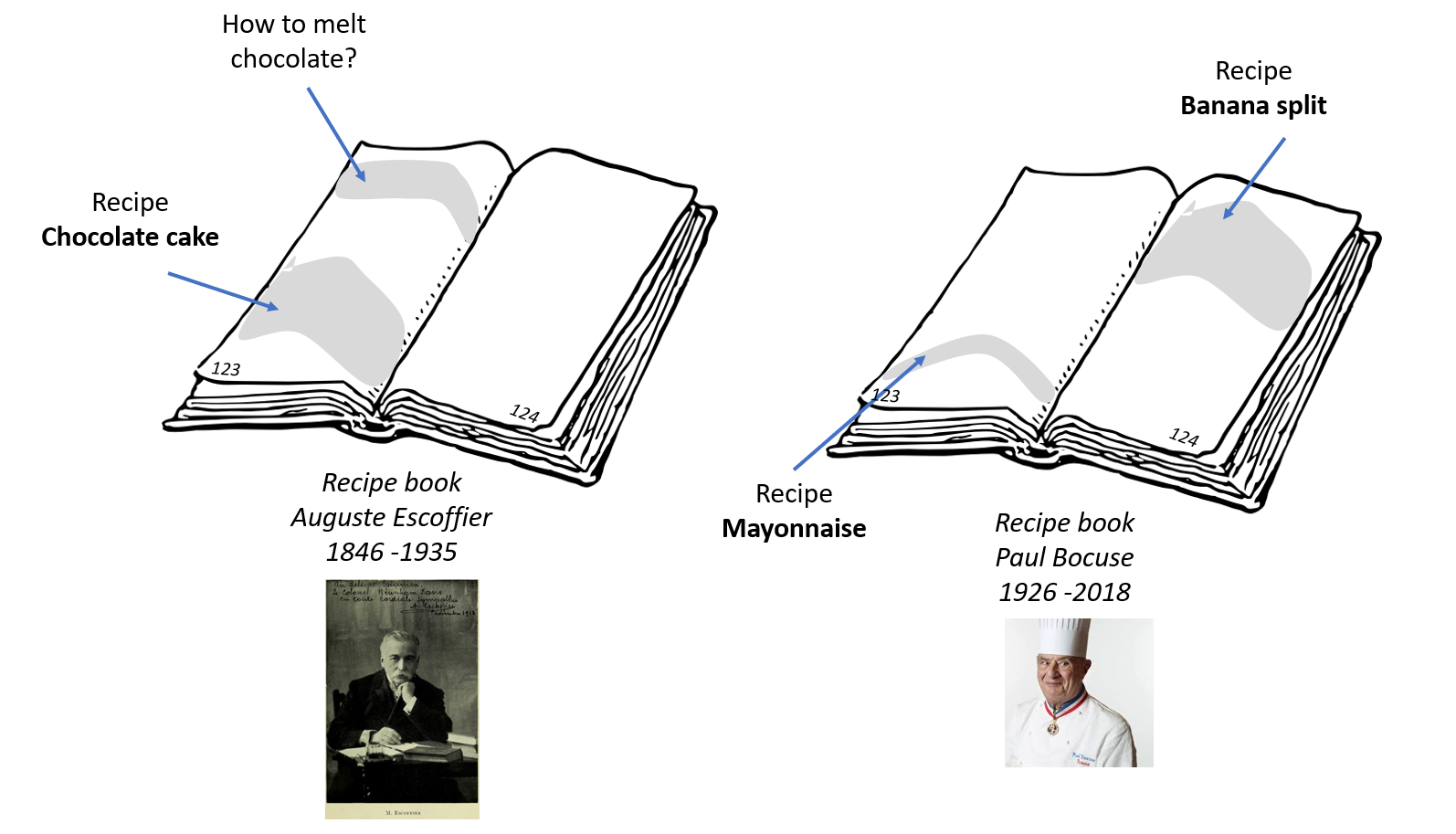 Comparing what is comparable: an example

Here are 2 different nucleotide sequences found in the banana genome. These 2 sequences have been compared with the human genome sequence. The nucleotides that ‘map’ between human and banana are in blue.

Left: the sequence corresponds to a non-coding region of the banana genome. Mutations accumulated in non-coding regions over time have challenged the ability of bioinformatics programs to detect ‘alignable’ areas: the calculation of % similarity is very complicated.

Right: the sequence corresponds to a coding region of the banana genome, which is orthologous to the human TBB8 gene. The nucleotides in blue are correctly mapped and the calculation of the % similarity makes sense.

In order to calculate the percentage of DNA which is common to humans and the banana, we have chosen to determine the number of genes which are ‘common’ between  the two species. These genes that are common between the two species are called orthologs.

The quest for orthologs between humans and banana

We then tested three bioinformatics methods to find orthologs: OMA, OrthoInspector, and BLAST.

In all of the bioinformatics methods used, the similarity between the sequences (and several statistical criteria) is what determines if two genes in different species are orthologs.

Here is a part of alignment between a human protein and a protein of the banana which are ‘orthologs’ (gene TUBB8). Find the differences!   (source)

We then divided the number of orthologs found by the total number of genes in the genome of each of the 2 species and took the average to obtain the percentage of shared genes.

An example of calculation:

The yellow circles represent the genes shared between humans and the banana.

1. What % of human genes are common to genes in the banana?

2. What % of banana genes are common to genes in humans?

Any one gene can be present in multiple copies in another species: that’s the reason why the number of yellow circles (orthologs) is not the same in humans and in the banana! 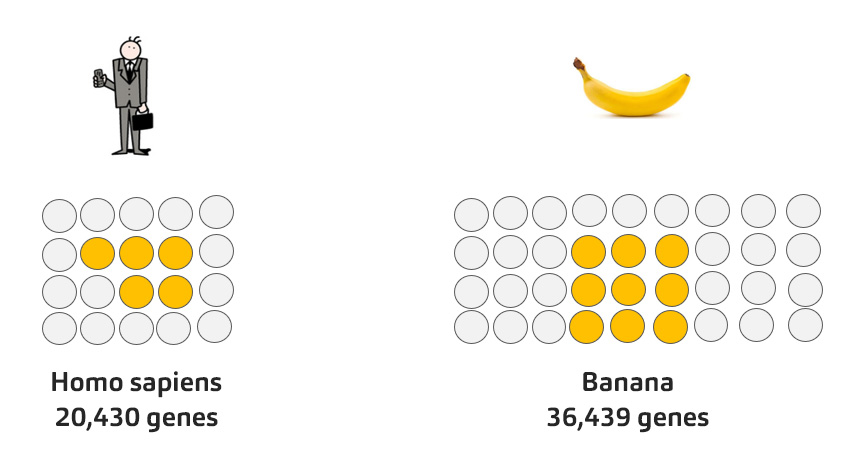 For the calculations, we have chosen to take the average of these 2 percentages.

Results obtained by the experts

Depending on the method used, between 3,400 et 4,900 genes are common to both humans and the banana. That represents between 17% and 25% of human genes. 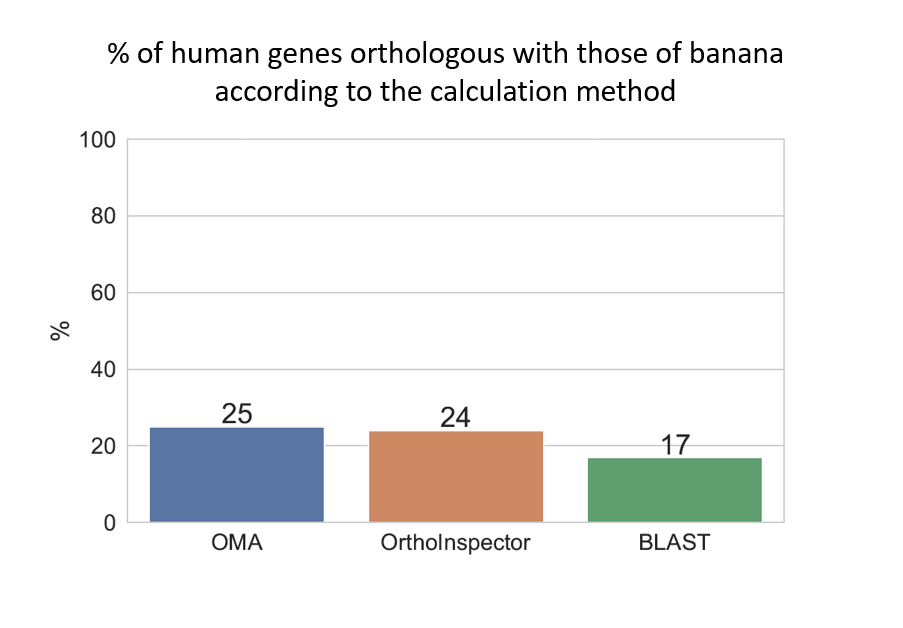 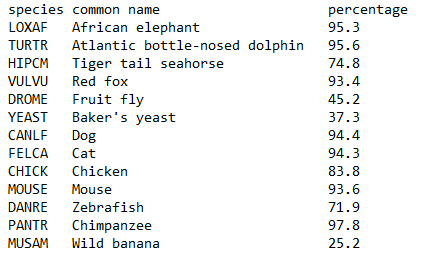 Although this percentage of conservation has been calculated  analyzing less than 2% of the human genome (coding regions/exons), this number is not negligible!

That means that the human/banana orthologous genes have been conserved for 1.5 billion years of evolution! 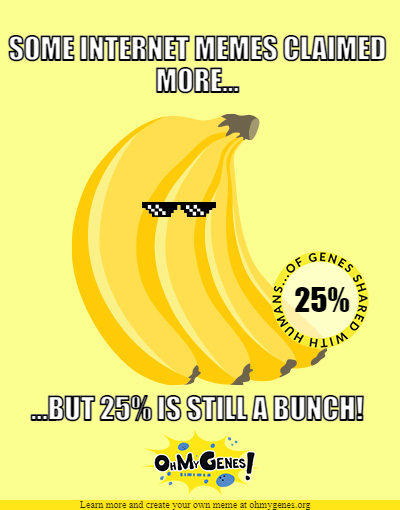 What is the function of human/banana orthologs?

We looked at the function associated with each of the orthologous genes. This information is found in a specialised database, such as UniProtKB.

Unsurprisingly, the proteins that humans and the banana have in common are primarily implicated in basic metabolic processes, such as gene expression, lipid metabolism, or the modification of RNA (splicing). 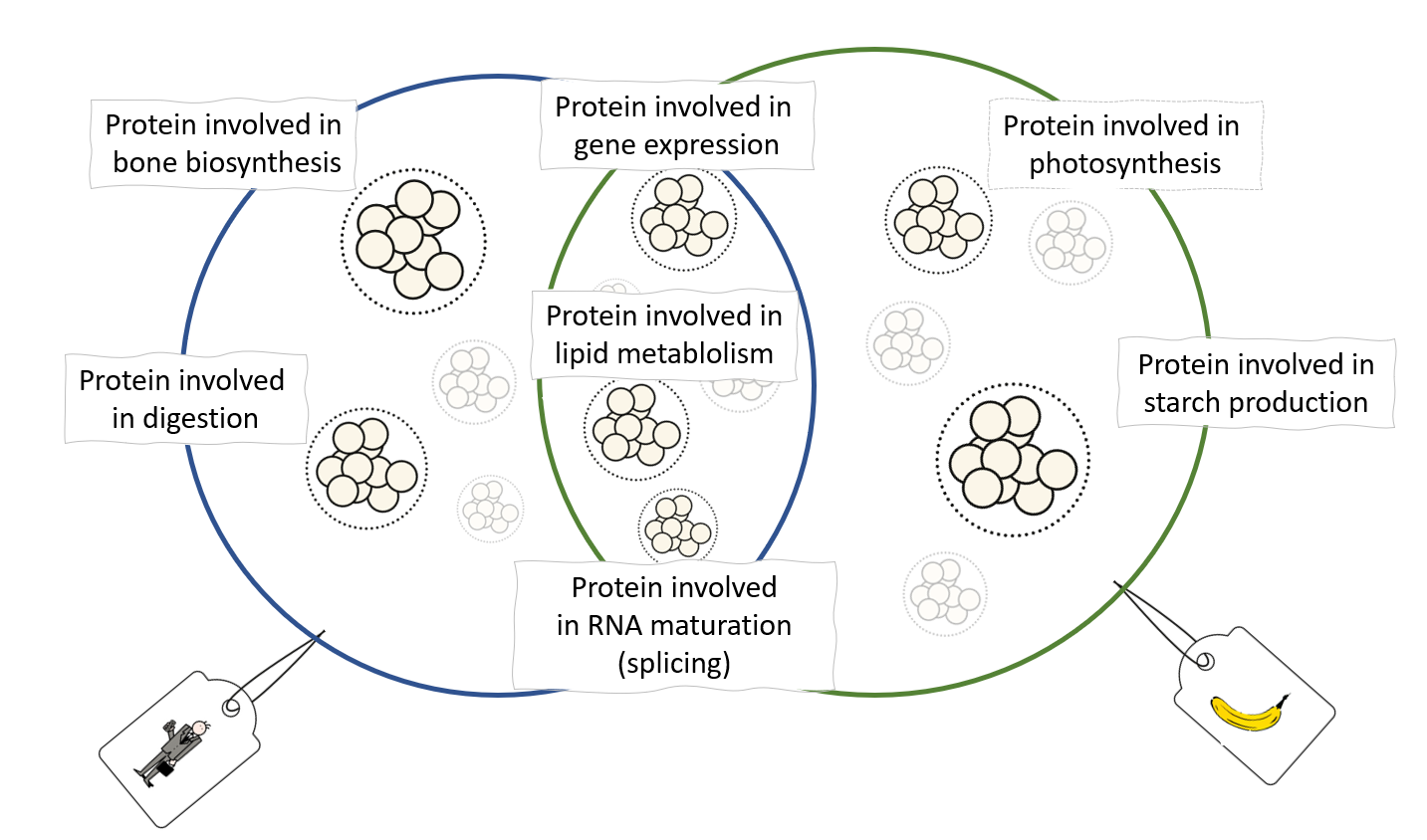 Even though humans and bananas 'split' 1.5 billion years ago, remarkably 25 % of our genes remain similar. These shared genes are responsible for the biological functions essential to the life of all eukaryotic organisms. That's bananas!

BANANA SPLIT - YOUR TURN TO PLAY

Identifying orthologs with OMA: a primer (2020)