Banana split
- Your turn to play

The quest for marbles!

Go back to 'Banana Split - Story'

The goal of this activity is to discover the concepts related to comparative genomics and, specifically, the quest for orthologs.

By the end of this activity, you will also understand how the OhMyGenes.org web site allows you to determine the % of genes in common between species of your choosing…and thus create fun memes.

Orthologs can be thought of as the ‘same’ gene in different species. Please review the following topics and story in order to familiarise yourself with orthologs and how we can use them:

A BIT OF EVOLUTION > Orthology: an important concept

OhMyGenes.org takes the average of these 2 percentages which, depending on the species being compared, may differ.

Note: One could have expected to have the same number of yellow marbles in the 2 jars. But, due to gene duplication, the same gene may be present in multiple copies in another species and vice versa. For example, the gene TUBB8 is found as a single copy in humans, but there are 18 ‘orthologous’ copies in the genome of the banana.

The yeast (Saccharomyces cerevisiae) is a unicellular fungus  which is best known for its use in making bread, wine or beer.

Note: Yeasts (fungus) are closer to humans than plants from an evolutionary perspective: the ancestor common to humans and yeast lived ‘more recently’ than that of humans and the banana!

Activity 2. Compare the species of your choice…

and create the most original meme at Oh My Genes!

What percentage of genes do we have in common with the dog, the cat, the tomato or the dolphin? 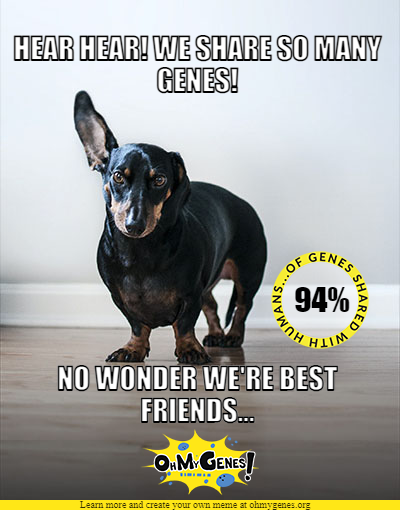 Lead the investigation…and once you have the % of genes orthologous between humans and the different species, try to represent your results in a tree similar to this one: 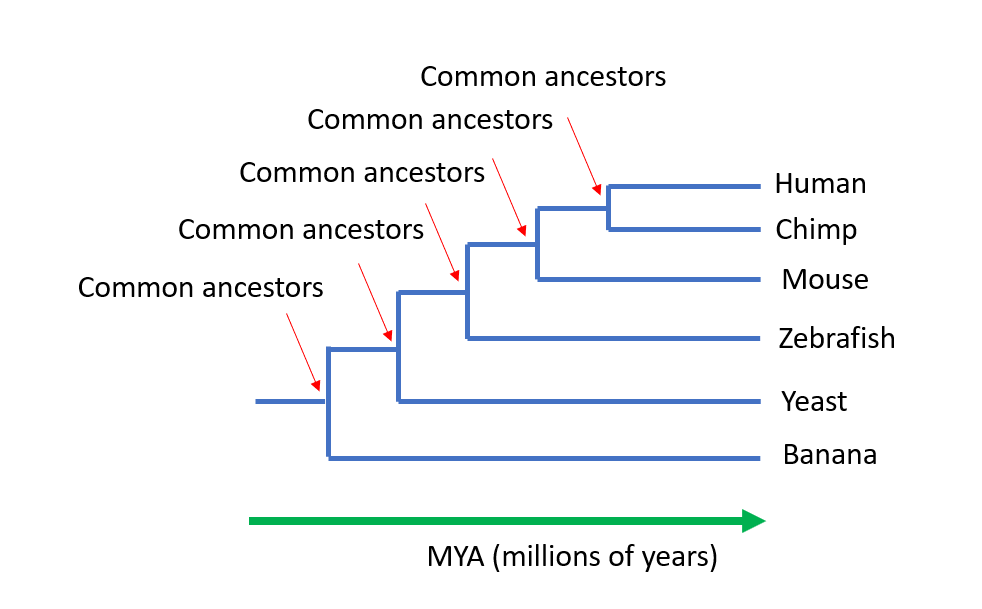 Percentage of genes orthologous to those of humans

Let’s take our example again, but this time with 5 species: E.coli (a bacteria), fruit fly, banana, humans and mice.

The different coloured marbles represent genes that are common to different groups of species or that are specific to a single species.

Note: Gene names may be different from one species to another or not yet assigned (N/A).

To learn more about these genes and the corresponding proteins, click on the links that will bring you to the UniProtKB database.